Just got back from Bubonicon 40, New Mexico's Science Fiction/Fantasy con.

As a former pilot, I am still an airplane geek. The Albuquerque airport has an extensive display of models representing airplanes with some connection to New Mexico (It could be as trivial as breaking down on the way to somewhere else). Here's one that caught my eye, this funky airliner that flew the route from Albuquerque to Cheyenne back in 1934.

I love old National Geographics and that quaint nostalgia I get reading from them, especially about life during the 1920-30s in the Southwest. Back then, people were setting all kinds of quirky flying records. This airplane belonged to the German aviatrix Ellia Bienhorn capturing the record from New York to Costa Rica (probably with a Mojito in her cupholder) and she made a pit stop in Albuquerque back in 1933. I wish I could've been there:

Bubonicon is one of the smaller cons and a little different because of its literary focus. Years ago, at my first writer's conference, one of the visiting agents kept telling us to write a story like Game of Thrones. In fact, she kept repeating, Game of Thrones, Game of Thrones. This weekend I finally met the author, the master himself, George RR Martin: 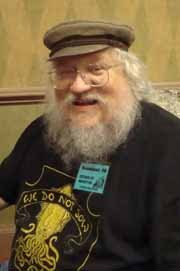 Writing Sci-fi is serious work. Giving us pointers about the business was the con headliner, the prolific and successful, David Weber (Seen here giving his keynote address. Note the moose hat): 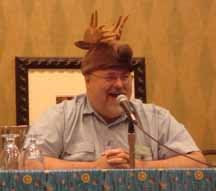 I hobnobbed with a bunch of great writers, to include fellow Eos author Eldon Thompson, and others such as Steven Gould (whose book Jumper is in movie development (I'm burning with jealousy)), Melinda Snodgrass, Ben Bova, and artist Bob Eggleton.

What's a fantasy con without costumes? One take on steampunk: 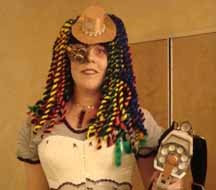 The winner of the costume contest, Nightmare on Elmo Street: 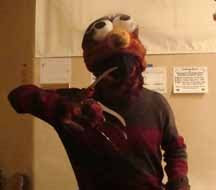 Don't judge a book by its cover (I recognize her from Match.com): 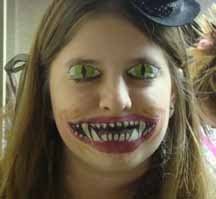 For some reason I'm compelled to add this picture of an Orion slavegirl. I think I'm drawn to the artistic merit of her presentation: 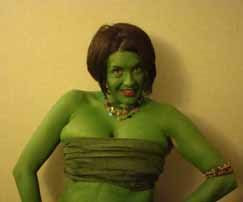 This week, it's a volcanic eruption of political wonkness in Denver because of the 2008 DNC. I'll prowl the streets, risk the tear gas, and give you my report. Stay tuned.  ¶ posted by Mario Acevedo @ 9:50 PM