Sunday, October 22, 2006
Another hero This last Wednesday I attended the 2007 Colorado Book Awards Gala. Jeff Shelby invited his critique partners, which includes me, to cheer him on. Jeff was a finalist in the popular fiction category for his debut novel Killer Swell. His competition included two other writer friends of mine, mystery author Margaret Coel, and fantasy author Carol Berg.

To avoid parking hassles (and in case I imbibed a wee bit much), I took the light rail. Amazingly, the stop is only two blocks from my place and goes directly to the Convention Center, a block from the Denver Center for the Performing Arts, the location of the Book Awards. Hell, that meant the most I had to walk was three blocks total, which I think I could do drunk (or at least try).

The Book Awards Gala was in the swanky Donald R. Seawell Grand Ballroom. Unfortunately, my plans to get lit were derailed by the price of my first Manhattan. Eight bucks! Anyway, I schmoozed and met lots of great people. Here's a picture of us (minus me and Tom Lawson). 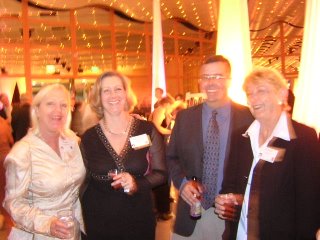 From left to right, Margie Lawson, Stephanie (Jeff's better half by a lot), Jeff, and Jeanne Stein. The picture looks blurry because of my 100 proof filter.

Dinner was some kind of bacon-wrapped mystery meat. Nick Forester of etown provided the entertainment.

Anyway, Margeret Coel won this category. She deserved it, as did Carol and Jeff. What to do? Easy. Buy Jeff's newest book: Wicked Break.  ¶ posted by Mario Acevedo @ 6:17 PM