Sunday, September 10, 2006
Conference and The Thing I had a busy week. A few days ago, I received my manuscript of X-Rated Bloodsuckers with the copy edits and I had four days to make the corrections, mail the manuscript back, and meet the deadline. More on that later.

This weekend was the Colorado Gold Conference hosted by the Rocky Mountain Fiction Writers. This conference is where my career as a writer began. In 1996 I won first place in Mainstream Action. Since then I've served as president of RMFW, contest judge, the handout dude, and all-around go-fer. I've met a lot of wonderful people and have had a great time at every conference. 2003 is when I met my agent Scott Hoffman and last year I received a Pen Award for finally getting published!

Fellow critique group member, Jeff Shelby, was there this year. His second novel, Wicked Break, just came out. His debut, Killer Swell, is a finalist in the 2006 Colorado Book Awards for best popular fiction. Both novels have made the bestseller lists of the Los Angeles Times and the Denver Post. However, since I know Jeff, I have an obligation to keep his head from getting too big.

My critique group members chided me for referring to my manuscript as The Thing. It's a labor of love, for sure. Still, the task of polishing my manuscript looms over my head like a boulder. Here's what the manuscript of X-Rated Bloodsuckers looks like with the comments from the copyeditor, Shelly Perron. 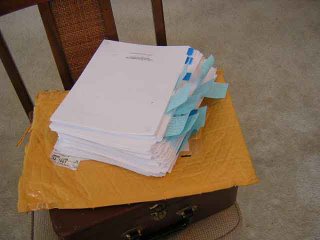 I received the manuscript just as I had finished reading The Great Gatsby. I haven't read TGG before and if I had, I doubt I would've appreciated it as much as I did now. I had to stop reading a couple of times to reflect on the genius of F.Scott Fitzgerald's writing. This edition included notes by Matthew Bruccoli and an excerpt of the revision letter by Maxwell Perkins, Fitzgerald's editor. As accomplished a writer as Fitzgerald was, the notes illustrated his struggle in writing and polishing this great novel and that only amplified my appreciation of The Great Gatsby. Here's the wonderful cover for the book, by Francis Cugat.

You all have an assignment. Buy Wicked Break. If you don't yet have it, add Killer Swell to your library. And go read The Great Gatsby.  ¶ posted by Mario Acevedo @ 6:27 PM

I thought it was an improvement.