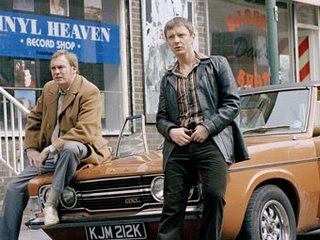 So the producer who made "Medium" is now coming out with another paranormal show about a "young dead woman who must return to Earth and help people before she can 'pass over.'" It's called "Meant to Be." My response to this is, oh, please. Like the dead have nothing better to do that help the living. If so, the dead are doing a terrible job. Hey, dead girl, ever hear of Darfur? I suggest you float over there as fast as you can.

Okay, some premises just bug. Those shows with angels sent to help people, the angels never seem to make it to places without indoor plumbing.

A show I am watching, and one that has an interesting premise, is BBC America's "Life on Mars." A police detective is hit by a car and wakes up in the 1970s. He thinks he might be in a coma. His experience might be some test that he must pass in order to continue living. He hears eerie hospital noises, like "the machine that goes ping," and voices speaking to him from the radio or the television. It's got moments of creepiness and terrific acting. (Unfortunately this show is cut to add commercials, so there are a few gaps in the storytelling.) And while I'm watching, I'm thinking, how are the writers going to pull this off? What are they constructing?

Writing is easy; all you do is stick words on a piece of paper. Plotting is hard, especially when you're setting up a world with a paranormal element. How do you justify the paranormal? Me, I took a biological approach and asked one of my doctor pals to do the hard thinking. I also did a little research into the origins of vampire mythology, which is extensive and quite varied.

I'll probably be talking about plotting when I lead a workshop on writing on September 26, at the El Cerrito Barnes & Noble. It's free, so no one can complain.  ¶ posted by Marta @ 10:01 AM

Comments:
Ok, I'm chiming in. Writing music can be the same way. It's easy to put words down on paper but the song won't fly if you don't have a hook. Hooks are the hardest parts and can drive you crazy. Sometimes it's worse for me to sit and stare at the page. I have to get up and forget about it for a while, go shopping. That's when it'll hit me, when I'm online with a load of stemware in my arms.