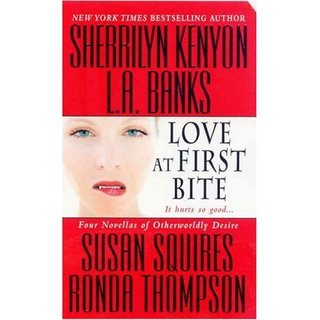 Susan Squires was kind enough to take some time from her busy writing schedule to talk to the Biting Edge. This talented and prolific writer doesn't confine herself to one genre, and her novels have ranged from historical paranormals to sci-fi thrillers to romances. Her last novel, The Burning, is part of an historical vampire series which includes The Hunger and The Companion.

Susan's running in fast company these days, and her novella, "The Gift", will be in the Love at First Bite anthology, along with writers Sherrilyn Kenyon, L.A. Banks, and Ronda Thompson. If you're up for some fast-paced, edgy, gritty, smart, and sensual vamp action, you'll definitely want to check out Susan's books.

Biting-Edge: How and when did you first get published?

Susan: The second book I wrote finally got published, after a long journey. I got an agent for it through the San Diego Writer's conference, and I thought a sale was not far behind. But it was a gritty Viking romance, with magic and religion and a male rape before page 50. It was not an easy sell, and was turned down by seven publishing houses. My agent gave me that dreaded call--"I love it, but I don't know how to sell it."

I didn't want to give up on it though, so I joined the Romance Writers of America and entered it in chapter sponsored contests. It started winning, and was bought by an editor who read it in the final round of the Orange County Chapter Orange Rose contest. Dorchester bought it, the vampire one I had in the drawer, and Body Electric, which I was just finishing, along with two future books. I think they are the only print house that would have taken a chance on me. They were a good place to cut my teeth and figure out if I could produce a book on demand, under contract. I did five books and a novella for them and I loved my editor there.

Biting-Edge: Who is your favorite character, series, or single book?

Susan: I never like this question, as it's always so hard to choose. I don't think there's a hero I've written that I wasn't in love with, or a heroine I wished I was. I like Vic in Body Electric because she's probably my most flawed heroine, I guess. I love all my vampire men. Right now I'm in love with Callan Kilkenny because I just finished his story and turned it in. He'll be in One with the Night.

If you are talking about another author's characters, my favorite has to be Stephanie Plum right now, but I've been in love with Jack Aubrey in Patrick O'Brian's Master and Commander series for a while, enough to read all 20 books twice.

Biting-Edge: What book do you wish you had written?

Susan: I'd like to have written any of James Lee Burke's Dave Robichaux mysteries. He's a wonderful writer.

Biting-Edge: What book do you still want to write?

Susan: I'll keep that a secret, because I'm going to write it right after I finish my vampire series for St. Martin's.

Biting-Edge: What do you wish you had known or had done differently when you were first starting out?

Susan: I almost got an agent for my very first book and she was a really good agent. She liked the book a lot but wanted me to cut it. (Gee, you think? It was 275,000 words!) I didn't know how to do that, so I didn't, and wasted some years before selling, I think. When the agent is serious enough to talk to you on the phone about cutting it, cut it and resubmit.

Susan: I have a story in an anthology called Love at First Bite coming out in October. I'm very lucky to be in a collection with Sherrilyn Kenyon, L.A. Banks and Ronda Thompson.

And then next up is One with the Night, coming in April next year where I get to do Scottish vampires and Loch Ness. It was loads of fun, and readers have been clamoring for Kilkenny's story after he appeared in The Burning.  ¶ posted by Marta @ 10:33 AM