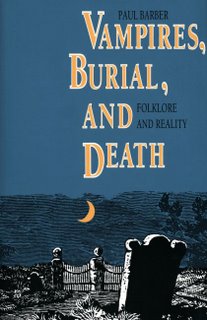 Big wahoo, I turned in my manuscript for my second novel, Midnight Brunch at Casa Dracula, to my editor this week.

Meanwhile, Happy Hour at Casa Dracula got terrific reviews in the Orlando Sentinel and in Book Fetish.

If you want to know some interesting facts about those nutty folk people who were digging up bodies, finding evidence of a vampiric nature, and staking the bodies, check out the essay by Paul Barber, the author of Vampires, Burial, and Death. See, that's what happened when people didn't have television to keep them occupied at night. They said to one another, "I'm bored. What do you wanna do?" "I don't know. What do you wanna do?" "Maybe we should go did up Pete Plogojowitz and see if he's really dead." "Cool."

Library Journal calls Berber's book, "a stimulating, authoritative discourse on the relationship between the historical concepts of vampires in folklore and fiction across the ages and throughout the world."

On a totally unrelated point, I love the hokey cover of this book, which reminds me of the scary books I read as a kid.

I found a cool website, the Ultimate Vamplist, a fairly exhaustive list of vampire books. Mario cleverly came up with a last name that puts him at the top of the list.  ¶ posted by Marta @ 9:54 AM

Comments:
Congratulations on turning in your manuscript! That must have felt good.