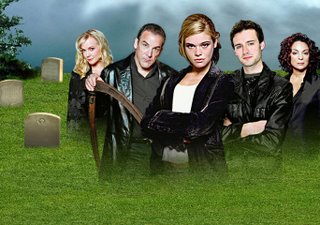 First, a confession. I don't have a clue what a blog is supposed to be. I guess there are as many interpretations as there are blogs. I know the original reason for this blog was promotion. Something that I'm not good at it. Networking, mixing at parties, working the fact that I'm a writer with a book coming out into every conversation will never come easy for me. So, this morning while I was spreading bark under a tree (a spring task that I'm just now getting around to) I tried to come up with a subject for today's entry. Something that would include my book or what I'm planning next or how nervous I am that ARC's are now out there and I'm waiting for the reviews (or lack of.)

All I could think about was a TV show I saw last night. Now this is going to be introspective and probably dull, so you can stop reading right here and I won't hold it against you.

I know very little about the show. I haven't googled it so I don't even know the names of the actors. I don't care about those details. It's a show that I guess was originally aired in 2003 or 2004 and may have been only a one season show. But I've caught reruns on Tuesday nights on the SCIFI channel, right before EUREKA. It's called DEAD LIKE ME. The premise is that for some people, death translates into becoming a reaper. One who gathers souls of the newly departed and points them on their way to whatever is next. The protagonist is an eighteen-year-old girl. She was killed in a freak accident and finds herself member of a group of reapers under the leadership of an older man who hands out their daily assignments (or souls to gather) each morning at a coffee shop. They have to lead normal lives in every other respect. They don't look like they did in life so they can't be recognized, and they have to hold down jobs and pay rent and do laundry and all the other day to day tasks we mortals contend with. But they aren't mortal and they have no idea why they are doing what they are doing or when they will be allowed to move on.

Okay, a lengthy lead into what I want to say about the show. Every damned week I come away from DEAD LIKE ME with a nagging melancholy that's hard to shake. The theme last night was the last thoughts of people as they died. Almost every one was a regret--someone they wished they had treated better, something they didn't do, an opportunity they were too scared or too weak to take advantage of. Okay, okay, I know this is FICTION--a television show. But it reminded me that it's the same for the living. Often when we lose someone close to us, especially if it is unexpected, we find ourselves dwelling on what we should have said or wished we had done. I've done it. I also know that at those times, we make all sorts of promises to ourselves that we will change our lives, not be so timid, never let an opportunity pass to show someone that we care.

And then in a few weeks, the feeling fades. We become absorbed/obsessed with everyday stuff. We carry on exactly as before. Sometimes I wish I could bottle that feeling of regret and lost opportunities so that every once in awhile I could uncork that bottle and take a whiff. Remind myself that life is a gift too soon gone. Would it change the way I live? I like to think so. But realistically, I'd get caught up again in deadlines and house work and gardening and all I'd be feeling is pressure and stress.

Then Tuesday comes along and I'll watch DEAD LIKE ME and thank the writers of that show for making me feel, if even for a little while, the way life is supposed to be.  ¶ posted by Jeanne Stein @ 7:14 AM

Hi, Jeanne, Dead Like Me is a terrific series, and I'm glad to see you found it. Great combo of introspection, humor, and weirdness. I especially love Ellen Murth's portrayal of George and the gradual transition from apathetic slacker to young woman with friends and interests. The woman who plays her boss at Happy Times temp agency is hysterical.

To Robin-- you and I must be kindred spirits-- I hope we have a chance to meet someday.

To Marta-- thanks for adding the link and the pic. I'm still learning to navigate Firefox. I managed the graphic last week, but pictures still elude me. And I do love Dolores, too. She's a kick. Just the right amount of pathos and ridiculousness.