Sunday, July 30, 2006
Weapons Fantasy creatures not only dress well, sometimes wearing a trademark protected costume, but they also have awesome superpowers which they use to cause mayhem. Vampires and werewolves have fangs, talons (or claws), and super strength. Witches have potions and spells. Ghouls and zombies don't have much except for bad breath (you'd think the'd try Scope after noshing on cadavers) and being persistent as cockroaches.

With the prevalence of technology, would fantasy creatures use modern weapons?

Why not? We accept that silver bullets are deadly against most fantasy creatures so why wouldn't they use these slugs to settles scores against each other? Vampires could do a drive-by against werewolves.

Flamethrowers. The classic anti-monster weapon. Remember The Thing starring Kirk Russell? He happened to show up with a flamethrower (probably stored in the office closet between the Scotch tape and the Post It notes). I asked a friend who works in Antarctica and she confirms that yes, they keep flamethrowers handy just in case they thaw out a UFO. Hey, why not let monsters get the drop on us humans and use the flamethrowers first?

Machine guns. A thoroughly underrepresented weapon in fantasy literature and cinema. I can imagine a warlock watching Saving Private Ryan and wondering, the hell with my toads and eye of newt, where can I get a war surplus MG42? Even the most macho werewolf will say ouch many times when you stitch him with machine gun bullets. 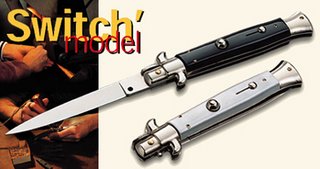 Many fantasy scenarios involve blades and knives, mostly as sacrificial accoutrements for carving out hearts, but what about the switchblade? Okay, vampires have talons which are like built-in switchblades and Wolverine has his Adamantium claws, but a switchblade opens with that metallic SNAP which means trouble.

On the flip side, fantasy superpowers are an allegory that nature has surprises that will undo human technology. (I'm getting philosophical and kinda academic here.) Chase a vampire with a tank and he'll fly away as a bat. Pull a revolver on a witch and she'll blind you with a spell. Attack in a fighter jet and a forest sprite will bring you down with a tornado.

What weapon would your fantasy creature carry?  ¶ posted by Mario Acevedo @ 10:09 PM