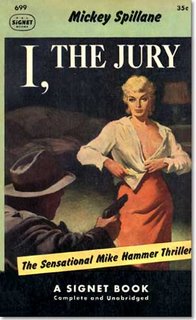 A lot of things on my mind today. Mario's signing at the Denver Book Mall was terrific. I know I've said it before, but he knows how to work a room. It was the first time I'd been to that book store, a conglomerate of several vendors each specializing in different types of books. Nina and Ron Else have the mystery/sci-fi section. It's great with old and new stuff, and I found an out of print book I'd been looking for. If you're in the Denver area, check it out.

Last week I talked about spending quality time with my characters. Robin Brande commented that it's "especially great when they're funnier and smarter than you are, and you can't figure out how you wrote them that way." Boy, does that ring true. Sometimes I'll review something I wrote a few weeks or months ago and think, that's pretty good. Other times, of course, it takes my writers group to gently point out just how badly that last chapter sucked. And isn't that what friends are for?

One of the masters of the hard-boiled genre, Mickey Spillane, died this week. I think what I loved most about him was that he said honestly what most writers will never admit. He wrote to sell books. He called writing an "income-generating job." His first book, I, the Jury, is my favorite. It was made into a movie (several) but the version I like best was the 1982 Fox version with a young, tough, sexy Armand Assante as Mike Hammer. Sure the themes are sexist, violent and sometimes racist. They were written for the most part, in the late 40's, 50's and 60's. But he could boil emotion down to the bones and his descriptions were fabulous (a word he would have hated). Every writer who has ever been called hard-boiled, owes the title to Spillane. He was 88.

And lastly, Mario asked where my vamps like to prowl. Course, for me, that's an easy question. I've taken liberties with the vampire legend. My protagonist and her fellow vamps prowl the sunny beaches of San Diego. They are not relegated to the dark of night so I send them to visit my favorite daytime places in my favorite town. It's my vicarious way of enjoying Mission Beach and Luigi's and the wildly popular Mission Cafe. I miss the ocean and the colors and the characters who make beach towns, well, beach towns. I'll always be a SoCal girl at heart.

PS--I work on a MAC and that has kept me from being able to insert links or pictures like Mario and Marta. Marta has been nice enough to go in and add stuff when she can. I have just been told about a browser called FIREFOX that supposedly will allow me to have access to all menu items. SO, maybe if I don't screw it up, by next week, I'll be able to add my own goodies, as well! If anyone has suggestions or comments about FIREFOX I'd love to hear them.  ¶ posted by Jeanne Stein @ 7:40 AM

Comments:
Wow, Jeanne, can't believe you put me on the same page with Mickey Spillane! That was one manly man of a writer. It's great to read someone who takes it all the way.

Couldn't agree with you more. I was almost afraid to add that part about his writing being violent, sexist and racist. You know how some people are. But he did write, for the most part, before the 60's "age of enlightment." And you know how that turned us all peaceful, sensitive and unbiased!!!

I'm glad you mentioned Mickey Spillane and I, the Jury.