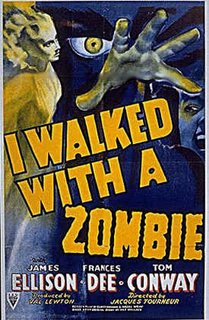 Like Mario, I'm rewriting the manuscript of my second novel. I don't mind. I can always improve something.

My editor was not keen on an incubus subplot. Incubi are not as much fun as vampires. Okay, incubi are kinda of the loozers of the demon world, but they're not as creepy as zombies, which I think anyone will agree.

Zombies make for slow fiction, but I think they are terrific in movies. Here are some of my top zombie movie pics:

Night of the Living Dead: George Romero's classic film about the rotting dead and the people who get eaten by them.

Sean of the Dead: Slackers, zombies, heartbreak, beer and a great soundtrack.

I Walked with a Zombie: A classic (1943) Gothic tale of a young woman from Canada who is hired to care for the wife of a wealthy plantation owner in the West Indies. Director Jacques Tourneur, who also directed "Cat People," made a beautifully shot and wonderfully creepy film.

28 Days Later: A guy wakes up from a coma and finds that zombies have destroyed the nation. A grim apocalyptic vision of modern society. Scary, smart, and well-made.

Army of Darkness: Hilarious adventures of a drug store clerk who is thrown into a world full of zombies, monsters, violence, and idiots. Bruce Campbell uses a chainsaw with zeal under Sam Raimi's direction. I think they made this movie for about $100 bucks, but the campy effects are part of the fun.

Anyone else have favorite zombie movies or zombified t.v. episodes? No, the last several seasons of "The Simpsons" doesn't count.  ¶ posted by Marta @ 12:14 PM

Comments:
I would say Sean Of The Dead is probably my fave. It's excellent British humor, which is always great, and fun/gruesome special effects. But also has a hefty side order of emotion. Artfully done.

One of my old time favorites is American Werewolf In London. DAVID!!
Who could not love that movie. It scared the bejesus out of me when it first came out! It's such a cult classic. Don't go near the moors.

I LOVED American Werewolf in London and the rapidly decomposing body of the Griffin Dunne. Great combination of real horror and humor.

One of my favorite things about that movie was the soundtrack -- all those versions of "Blue Moon." Whenever I hear that song now, I still think of American Werewolf in London.

Hi Marta, (By the way, I got Forever Amber, thanx for recommending)
OHMYGOD! Yes! Blue Moon. I can't hear that song without thinking of that movie, too!! I actually just bought that classic 3 weeks ago so I can watch it every Halloween ;') I loved Griffin Dunne! What a riot! He eventually became a rotting puppet head. I loved the old special effects. The woman in the movie was so early '80's looking. It was great.


Outside of the ghoul/vampire/zombie flix, I would say my absolute favorite ghost story of all time would be.....drum roll please....Poltergeist! It was a real live scary thrill ride with emotion thrown in, also. "You built the houses on a cemetery but you didn't move the bodies',YOU DIDN'T MOVE THE BODIES'!!!! lol, so great.