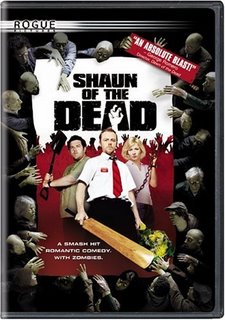 Enough with the chupacabras already. I'm not even going to mention that Mario's so-called "date" was on an evening when he was hanging with a peyote-dealing shaman who lifted his wallet, doped his caramel frappacino, and totalled his 1966 Chevy Malibu SS convertible.

On to other creatures of the night, and my taste runs toward funny scary. If you haven't seen the comic horror flick "Shaun of the Dead" rush to your video store and rent it right now. A couple of British slackers must fight off an invasion of zombies. There's a great fight scene in a pub with Queen blasting on the soundtrack.

If you'd like to read my interview with comic horror writer Christopher Moore, which ran in the San Francisco Chronicle on Monday, here it is.

I'd love to include zombies in a story someday, but wish they had better fashion sense and were capable of witty banter.  ¶ posted by Marta @ 11:37 AM

Comments:
Shaun of the Dead was awesome!
Well, if you're writing a zombie story, please don't make it a romance.
It'd bring new meaning to "he put his arm around her."

The star of "Shaun" was also in an hysterical British series called "Spaced," but I don't think it's available in the states. I saw it on a plane.

I have a fondness for stories with loozer heroes who win out in the end, like "Army of Darkness."